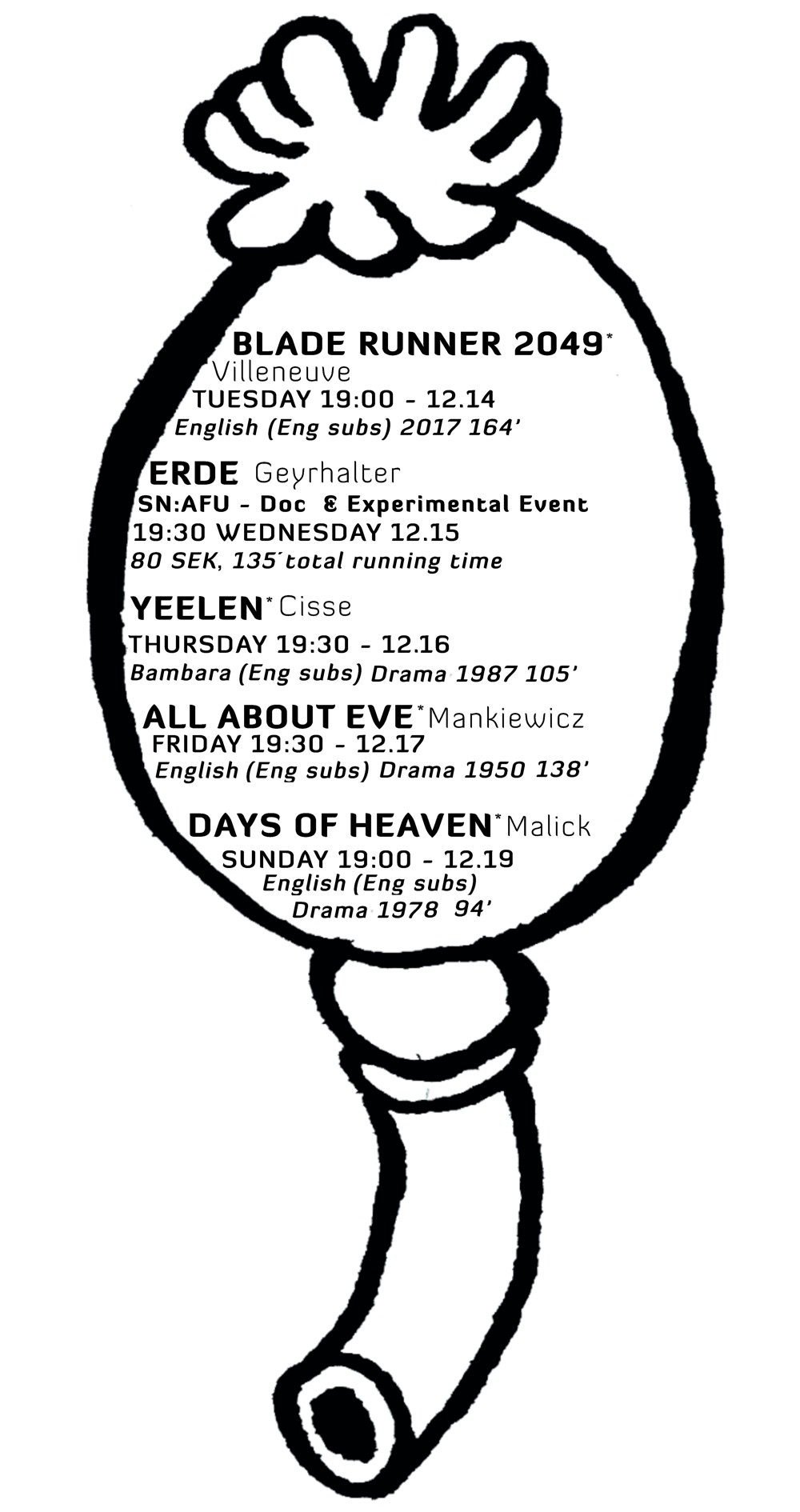 Hungarian filmmaker Bela Tarr makes dark, mystical films that feel like elegies for the ache in man’s collective spirit. In his exquisite “Werckmeister Harmonies,” Tarr offers a film that’s more accessible than his 7 1/2-hour epic “Satantango,” but one that wrestles just as assiduously with themes of evil and apocalypse and faith.

Set in a bleak, unnamed Eastern European town, “Werckmeister” isn’t standard movie fare. It’s challenging; it’s slow and poetic and stubborn in its refusal to play to our habituated expectations as moviegoers. Shots last as long as five minutes and are presented without the standard montage of long shot, medium shot, close-up.

Come along, Tarr seems to say, surrender and see what you might find. Like Russian filmmaker Alexander Sokurov or the late Polish master Krzysztof Kieslowski, Tarr makes mysterious, open-ended films that tap into spiritual realms and become occasions for our individual meditations.

Presented with support from Mamö Stad!

*Date is subject to change due to the ongoing restoration process.

Albertina Carri’s second feature is a look at Argentina’s recent history from the perspective of a generation forced to mourn those of whom they have no recollection. Carri, who lost her parents to Argentina’s brutal military junta when she was three years old, travels through Buenos Aires with her crew to unravel the factual and emotional mysteries of her parents’ life, disappearance and death. Traces of Carri’s family emerge, colored by sharply conflicting perspectives. Who were the Carris? How did they disappear? Were they blonde, brunette, parents, heroes or merely a fiction of those who remember them?

Crossing the line between documentary and fiction filmmaking, Carri enlists an actor, her parents’ former comrades, fading photographs and happy Playmobil dolls to investigate her parents’ untimely end. In the end, merging fact, rumor and imagination, Carri succeeds in reconstructing both her parents’ history and her own construction of them. Emotionally fraught and intellectually provocative, THE BLONDS has resonance far beyond the tragic history of Argentina’s dirty war.

Presented with support from Mamö Stad!

Two students accused of cheating by an older professor appeal to him for clemency, only to end up in his apartment, where he quickly gains the upper-hand. After initially succumbing to his advances, one of the girls tries to resist, prompting a gut-wrenching denouement as he’s determined to get his way.

“Mo” is the feature directorial debut of Radu Dragomir, who was inspired by real-life events to tell a story that confronts Romania’s troubling track record with rape.

Goran is a dark comedy which has one’s head spinning around for direction as if being lost in a blizzard. Partly from trying to figure out what was real and what was hallucination, and some of it was just flat out wondering how and when the action is going to begin. The Croatian import Goran – which is also the primary character’s name – by director Nevio Marasovic is a disturbingly interesting walk through the Croatian mountains, where the only thing in abundance more than paranoia is snow.

“Araya” is a tone poem, a poetic portrait of an ancient existence in the modern world, with narration (scripted with Pierre Seghers) to match, a kind of blank verse that continually circles a few vivid and evocative motifs. Margot Benacerraf never meant it to be a documentary in the strictest sense. “I decided that I wanted to tell this story, but not as documentary in the contemporaneous sense of the word,” she explained in an interview years later. “I wanted to employ a more poetic mode, a narrative shaped by scripted rather than spontaneous action, a fictionalized documentary if you will, the flip side of the Italian neo-realist style which had enjoyed such prominence during the decade.”

Twenty-year-old Kamal has been married for a few months but his wife is still a virgin. Learning that there is nothing physically wrong with him after visiting a doctor, Kamal sets off to town to search for another woman. By the director of ‘Angel on the Right’.

Titled after a fictitious king who terrorised, enslaved and ultimately profited from the sale of people from neighbouring villages to western slave-traders, this perspective of this film is unique in a history of cinema dominated by western filmmakers. Director Roger Gnoan M’Bal’s film directly attacks the african elite for their contribution to the horrors of the slave trade, doing a great deal to undermine the innocence granted to the entire continent. The film acts as a reminder that money universally arbitrates the lust for power, greed and brutal treatment of fellow humans.

Sokurov reportedly rehearsed his all-important camera move again and again with the cinematographer, the actors and the invisible sound and lighting technicians, knowing that the Hermitage would be given to him for only one precious day. Every review of “Russian Ark” begins by discussing its method. The movie consists of one unbroken shot lasting the entire length of the film, as a camera glides through the Hermitage, the repository of Russian art and history in St. Petersburg. The subject of the film, which is written, directed and (in a sense) hosted by Alexander Sokurov, is no less than three centuries of Russian history. The camera doesn’t merely take us on a guided tour of the art on the walls and in the corridors, but witnesses many visitors who came to the Hermitage over the years. (…) if the film had been composed in the ordinary way out of separate shots, we would question its purpose. But it is not, and the effect of the unbroken flow of images (experimented with in the past by directors like Hitchcock and Max Ophuls) is uncanny. If cinema is sometimes dreamlike, then every edit is an awakening. “Russian Ark” spins a daydream made of centuries.

Visually stunning – is the most mystical and the most beautiful of African films.

Presented with support from Fritidsförvaltningen Malmö!

Presented with support from Fritidsförvaltningen Malmö!

An independent private security firm offers its services to a middle-class neighbourhood. Through that trivial situation Kleber Mendonça Filho unfolds some of the persisting tensions shaping Brazilian society. How much does safety cost? Can a sense of community be built around common anxieties? What is the relation between fear and community?

Memories of Underdevelopment presents an ambiguous portrait of Revolutionary Cuba through the stream of consciousness of an aspiring writer. The cinéma vérité-like aesthetics and the usage of archival material clashes with the subjective viewpoint of the film’s protagonist. Is Cuba disintegrating or does the problem lie in the worldview of the bourgeoisie, trapped in their own nihilism and unable to grasp the nuances of a convulsive reality?

Even though Tsai Ming-Liang’s THE HOLE (1998) was released 23 years ago, it’s one of the films best depicting what city life has been like during COVID-19. Part of the New Taiwanese Cinema, the film is set at the turn of the millennium in the lower class districts of Taipie during a pandemic called “the Taiwanese flu”. This virus is thought to have spread to humans through cockroaches, and THE HOLE is filled with such now recognizable apocalyptic scenarios like the hoarding of toilet paper. In this both melancholic and funny quarantine romance (which is also a musical!) Tsai Ming-Liang tells the story of two lonely people trying to cope the best they can as their lives, and the building they live in, fall apart. On top of everything, a plumber drills a hole between their floors and leaves the job without covering it. At first, the up- and downstairs neighbors get on each others nervs as noises, smells and objects are exchanged, but slowly the hole stats to bring out their curiosity and desire.

A boy cannot come to turns with the new order of things, so he takes it upon himself to challenge the change…

“The World” is Jia Zhangke’s forth feature film, and the first one to be approved by the Chinese government. Following directly after his “hometown trilogy”, the director depicts the impact of globalization on the lives of ordinary people from his own province, but this time in a more urban context: an amusement park outside of Beijing. We follow the rural migrants working, and living, in a world of miniature tourist attractions such as the Eiffel Tower, the Pyramids, the Taj Mahal and Big Ben.

Unknown Pleasures is Jia Zhangke’s third feature film, and the last of an informal trilogy taking place in his rural hometown in the Shanxi province. The film depicts the realities of two unemployed teenagers, belonging to post-socialist China’s “aimless youth”, who are growing up in a devastated city while surrounded by western brands, cinema and dreams.

In a time where votes are our most dear human currency, we follow characters who desperately seeks to win the election by collecting votes.

A young girl lost in the dizzying commotion of Tehran, tries to find her way home by her visual memory, a memory where reality and fiction intertwine.